Week 13 was really great because I was home in the states. I know this is a travel blog and this is not really about traveling, but I feel like it was such a great week home and I did so much that it warrants a blog post. On Saturday, I woke up and headed down to Northern Virginia because my friends Matt and Colleen were getting married. It took longer than I thought so I missed the shuttle bus from the hotel and had to carpool with Monica to get there. It was nice to catch up with her because I hadn’t seen her in 2 years. We made it the the wedding just in time and even had to run down the hill to get there with Colleen making fun of us. The wedding was at this beautiful barn and the wedding perfectly suited them. Colleen had an amazing dress and it shimmered in the sunlight as she walked down the aisle. Matt was so happy he cried during the ceremony and Colleen again forgot which hand was her left hand. They are such and amazing couple and I wish them every happiness in the world.

The reception was really fun and I did a lot of dancing and catching up with people. I got to catch up with Joey as well which is always a good time. I may have had a bit too much wine that night and when we were trying to go home I spent 10 minutes trying to find a jacket that I never even had. We took the shuttle back and then stayed at Joey’s house for the night. I felt really bad because the next day Monica had forgotten her keys in my car so Joey had to drive us all the way back to the wedding so I could get my car and Monica could get her keys. Joey is the nicest person ever.

After I got to my car, I drove back to Ellicott City, did a quick change, and headed to Sabala’s parents house for her henna ceremony. I got to hang out with Amy, Lisa, and Ashley which was great to see and of course to see Sabala because she was just so excited and happy. The ceremony started with her sitting on a little bench with her “little friend” a little girl relative who had to receive all of the blessings as well. Everyone at the party had to put oil and powder on her face, rice in her hair, and then grab a coin and do three circles then put it in a jar. This oil and powder is a way to moisturize and clean the bride and usually this ceremony lasts around 5 hours, but Sabala told her mom that she would do just one hour. After, she went up to shower and change into a different Sari. Then, we ate amazing Indian food that Sabala’s mom and relatives had made and it was amazing. It was so warm we were able to eat outside. Finally, they broke out the henna and started doing henna designs on the palms of our hands. It was a great afternoon and it was so great to see my friends again. That night, my sister and aunt, uncle, and cousins came over for dinner and it was awesome to see them too. 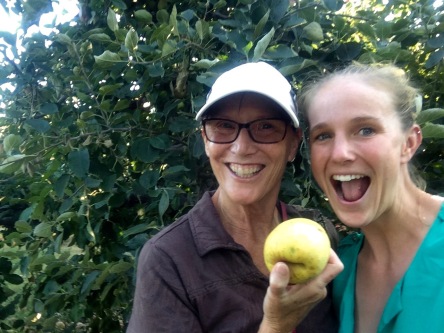 Monday through Wednesday I hung out mainly with my mom and dad. I had a lot of errands and chores to do that I had been putting off while traveling and was super busy. Also, of course my mom and I hit the sales racks at Target and Kohls. My mom and I tried to do one fun activity every day. So one day we went and got manicures and pedicures together, which is always to relaxing especially when they give you mimosas in the middle of the day. Another day, we went to Lariland Farms and went apple picking and looked for some tomato and other veggies as well. We bought a couple of cool squashes and some apple cider.

On Thursday, I woke up and met Kendra at the voting booth to do early voting. It is super important to vote in this election and I needed to do my part. Then, we drove and picked up Becca and caravanned down to Sabala’s wedding at the Omni in Homestead. We stopped at JMU of course and had lunch at Jack Browns and the burgers were as good as always. Our server was a girl named Camille who I had been in a fraternity with in college and who is Christabelle’s big. It was good to see her again.

Then, we took the crazy windy back roads to get to the hotel. The hotel was a super expensive massive hostel, but the property was beautiful with the leaves changing colors. Becca, Kendra, and I went up to the room and started drinking some beers and catching up on a lot of missed time together. We are the international gang who all live in foreign countries. We took a shuttle into town for dinner because eating at the hotel would have been ridiculously expensive. Lisa, Jordan, and Amy arrived at like 1 in the morning so I didn’t get to see them until the next day.

Friday was Sabala’s wedding day. She looked absolutely gorgeous and was just radiating happiness. There is something about a girl on her wedding day where her beauty is just bursting out of her. We get ready in the room and then go down to Sabala’s suite to get ready with her. She had just gotten back from hair and makeup. Sabala had bought us all matching robes to wear that even had out names on them and personalized notes about how she was happy that we were a part of her life. She is literally one of the most thoughtful caring people that I know. We took pictures on her bed in our robes and then we recruited some of her cousins to help us all put on our Saris which was quite a long process. I really liked my Sari though. It was a beautiful blue/green and I have decided that I want to be married in a Sari as well. 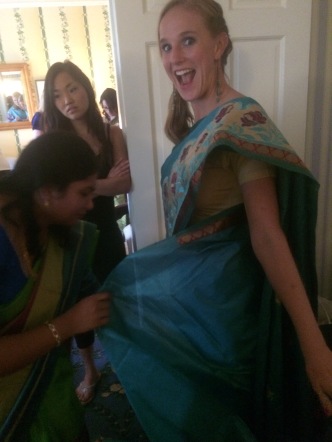 The first ceremony was her Indian ceremony and I found it to be fascinating. I had never been to an Indian wedding before and I love all of the traditions that go into the ceremony and all of the symbolism. Both sets of the parents are an integral part of the ceremony and though I could not see half the time because they were sitting or understand what was being said it was beautiful. At one point Sabala left to change her Sari because symbolically she was stripping her own family and embracing the family of her husband. Another point they were leading each other around in circles and were tied together. It was just really wonderful.

After the Indian ceremony, there was cocktail hour where we all went to change into our normal dresses and Sabala was changing into her traditional wedding dress. The western ceremony took place outside, which was a bit chilly but very stunning. There was this giant staircase leading down to the ceremony where all of the groomsman and bridesmaids walked down. Sabala looked beautiful in her white wedding dress as well and I teared up a bit when I saw how happy she was and how Paul looked at her. I liked there ceremony because it was very simple and basically just told their love story. Everyone there was very touched. Then, we went in and had dinner and did some dancing. After everything, I sat in the hallway with Becca (Kendra was inside sleeping) and we talked for a couple of hours. I always forget how much I value and miss my friends from home until I see them again. They are the people I can always rely on to be there and I wish we could all get together more often.

The following day I woke up and had a brunch with my friends from home and then drove to meet up with Christabelle and Jason to go on a hike. I have not been home during fall for a long time so it was nice to hike out in the crisp weather and see all of the different colors of leaves. It was also amazing to see Christabelle as I always miss her so much. We talked pretty much nonstop for the couple of hours that we were hiking and I did feel a bit bad for Jason because I don’t think we let him talk very much.

After, we drove to Christabelle’s house where her mom spoiled us with spaghetti and meatballs and an individual pumpkin cake with whip cream and halloween sprinkles for each of us. Then, we watched Jurassic world the rest of the night.

The next day we got a tour around her parents property and I got to see all the new chickens and hens running around and was able to see their new finches as well which are really the dogs pets as he just sits there and watches them all day. We played a couple of rounds of scategories. I love that Jason and Christabelle like playing games with me. Then, I drove up to my sisters new apartment to help her move in. My parents had been helping her all day and I came it just at the end. He apartment is really nice and I am so happy for her that she has gotten a new job. 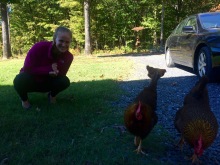 Monday was my last full day home and in the morning my mom and I went on a walk with Becca and her mom. Again, it was a beautiful time of the season and it was nice to get outside and again just catch up and hang out with our moms. Then, we went out to lunch at this amazing sandwich place. 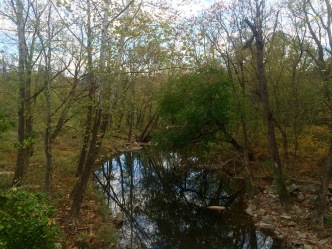 That night the pool group came over to our house for drink and some pizza and again it was just so great to catch up with everyone. Mary Kate , Amy, and Becca were all there and all of the parents. It was nice to meet Amy’s dog who is adorable. It was a great way to end my time at home and get ready to go to Asia.

Now I am on to my next adventure!!