So this week had its ups and downs….well mostly ups and just one down. After hiking Conception volcano on Saturday my muscles were very sore on Sunday and so Nathan, Charlotte and I went to a place called Ojo de Agua (eye of the water). It is a natural forming pool of water in the jungle that they have now built up to be two swimming pools, lounge chairs, hammocks, restaurant, and rope swing. It was a good way to pass a day but as it was Sunday there were a lot of kids there running around screaming. It was an absolutely gorgeous place.

The next day I started my trek to the other side of the island closer to Maderas Volcano. I took the chicken bus as far as I could which was to Balgue and then I had to walk the remaining 2.5 km which was about 30 minutes with all my stuff to the hostel. I chose this hostel called Jardin de La Vida (garden of life) because it was a bit off of the beaten path and it was an ecolodge run by a couple from the US. I was trying to avoid Little Morgan’s hostel which just seemed more like the party hostel on the island and they did not take reservations. At Jardin de La Vida, I really felt like part of the family. A British girl named Meg was volunteering there as well and I really hit it off with her. Two other girls from Montreal also joined us later in the day. That first night we all went out on a sunset kayaking cruise. We paddled out, looked at the rainforest from the water, went for a swim, watched the sunset, and paddled back in the dark. It was very serene and beautiful and we saw all different types of birds and jumping fish. The dinner at the hostel was family style as long as you told them earlier in the day that you would be eating. The first night we had a chicken stir fry and the second night pasta made from scratch. The food there was so good!!! Also they had large portion sizes as well which was more important the second day. The hostel was truly an ecolodge because the whole thing ran off of solar power, they had compost toilet, and your sink was just a spicket of water. The beds were super comfortable thought with amazing pillows (all hostel pillows are usually just so flat). 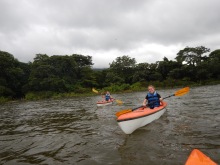 The next day we woke up very early to hike the second volcano on the island called Maderas. This hike was very different than Conception and what made it a bit difficult for me was that my muscles were still a bit sore from the first hike. The hike was less steep, but most of the hike you are going through really slippery and deep mud so I was just covered in mud when we finished. During the hike, we climbed through 3 types of forest. We started at the bottom with what they called the dry forest, moved up through the wet/rainforest, and finished in the cloud forest. The scenery was stunning when I was able to look up and not risk falling down. Also, you could really see the difference between each type of forest. Once we got the the top, we hiked down into the crater and there was a laguna up in the crater since it was not an active volcano. It was interesting at the top because it was a bit cold and the cloud just hung over the lake which make it look very mysterious. At one point the cloud lifted and we could see the whole thing and that was a really pretty view. Then, we just hiked right back down, which took us as look as coming up because we were afraid to fall (which I did in an epic fashion 3 different times). In total the hike was about 7.5 hours including that same 30 minute walk I had to do the first day to get back to the hostel. Again on the hike we saw lots of howler monkeys!! 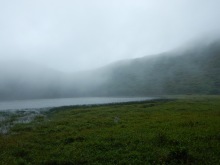 On Wednesday, I had the adventure of getting to Granada from the other side of Ometepe. I missed the 8am bus by 2 minutes so I had to wait on the side of the road (in the rain) in Balgue (after a 30 minute hike) until 11:30 for the next bus. Throughout the day I took 2 chicken buses, a ferry, a taxi, and another chicken bus to reach Granada. For all of this it cost me less than $5! Getting around Nicaragua is so cheap! I stayed at a hostel called The Oasis which is a pretty amazing hostel with lots of common space, hammocks, a pool, and a free pancake breakfast. Then, I then went to a really good restaurant in Granada called Pita Pita and had falafel then went to bed early.

The next day I headed to Laguna de Apoya which is again a crater lake to a really old volcano. I stayed at the sister hostel to the hostel I stayed in Granada called Paradiso. There was a shuttle for $6 round trip to the Laguna and you could either just go for the day or stay overnight, but I would book ahead to stay overnight as they were full the whole time I was there. This was probably my favorite location so far on my trip. It was absolutely stunning scenery, the hostel was chill and friendly, and the beds comfortable. It felt like you were away from everything and could really relax. They food was good as well! They had a floating dock, lots of lounge chairs, free kayaks and tubes for use, and a really great restaurant. Everyone there were pretty much young backpackers which made it easy to meet people by just sitting on the dock all day. I was there for two days and then returned to the Oasis hotel in Granada.

After returning to Granada, I went on the night tour to the Messiah volcano. This is one of the most active volcanos in Nicaragua. We waited in line in the shuttle and then we drove to the top of the volcano. Once up there the whole world turned red. It had the feeling of hell and is probably why the locals called this placed the gate to hell. If you stood up on some rocks you could see all of the lava moving below. It was like a river the would spit high at some points and bubble. It was quite and amazing site.

Saturday I took an island tour of Granada. Granada is located next to the same large lake that hosts Isla de Ometepe. On this lake there are lots of little islands that rich people from Nicaragua and all over the world own and build a house on. We took a small boat tour through these islands which included stopping at an island with a small fort, passing by monkey island (where they put a couple of spider monkeys for the enjoyment of the tourists) and then at a hostel/restaurant with a pool. The last stop was really chill and I had a really good tour group with whom I also went to lunch with and out partying with that night.

That night we went out to a hostel called the treehouses which is literally a tree house with some hammocks. It is known for its good party scene and has a free shuttle (you hop in the bed of a pick up truck). It was an ok party but nothing to write home about but I brought my phone out since I was going to mainly a backpacker party and wanted to take a picture of the tree house. The swiss girl that was with me wanted to go to another bar that was a bit more local in town with better dancing so we went to that instead. I was having a really great time at the bar because this cute Nicaraguan guy was showing me how to salsa and bachata. Then, someone snatched my purse out of my hand and ran out of the bar. We chased him out of the bar and down the street but could not find him. So that put a bit of a damper on the night and therefore I also do not have pictures of the treehouses or the Island tour. I am just so mad at myself because usually I am smarter about the things that I bring out with me and a phone is usually not included. But you live and learn.

So Sunday I woke up early and started to get everything sorted on the things that I lost. My parents were super helpful! They ordered me a new phone and cancelled my credit card and my friend Lisa will bring it down when I meet up with her in Aruba tomorrow. So I guess at least I lost my phone with good timing. Then I hopped on a Tica bus and started to make my 30 hour trek down to Panama City from Granada. Why do this you may ask? It saves me net $300 to fly to Aruba from Panama City than it did from Managua. So here I am on a bus with wifi writing this post. We are almost at Panama now! Tomorrow I go to Aruba where I get to meet up with Lisa, Jordan, and Kendra!!